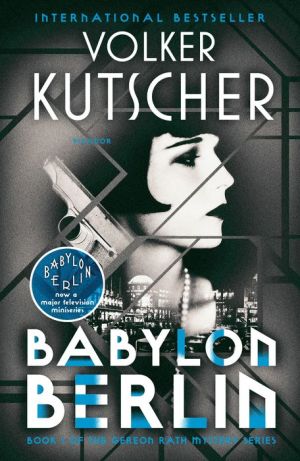 Babylon Berlin: Book 1 of the Gereon Rath Mystery Series by Volker Kutscher THE BASIS FOR THE INTERNATIONAL TV SENSATION BABYLON BERLIN "Cabaret on cocaine...captures the dark glamour of a briefly exhilarating time between the wars." NPR Babylon Berlin is the first book in the international-bestselling series from Volker Kutscher that centers on Detective Gereon Rath caught up in a web of drugs, sex, political intrigue, and murder in Berlin as Germany teeters on the edge of Nazism. Its 1929 and Berlin is the vibrating metropolis of post-war Germanyfull of bars and brothels and dissatisfied workers at the point of revolt. Gereon Rath is new in town and new to the police department. When a dead man without an identity, bearing traces of atrocious torture, is discovered, Rath sees a chance to find his way back into the homicide division. He discovers a connection with a circle of oppositional exiled Russians who try to purchase arms with smuggled gold in order to prepare a coup détat. But there are other people trying to get hold of the gold and the guns, too. Raths finds himself up against paramilitaries and organized criminals. He falls in love with Charlotte, a typist in the homicide squad, and misuses her insiders knowledge for his personal investigations. And as he gets further entangled with the case, he never imagined becoming a suspect himself. The first in a series thats been wildly popular in Germany is an excellent police procedural that cleverly captures the dark and dangerous period of the Weimer Republic before it slides into the ultimate evil of Nazism.Kirkus Reviews Conjures up the dangerous decadence of the Weimar years, with blood on the Berlin streets and the Nazis lurking menacingly in the wings.The Sunday Times (London) James Ellroy fans will welcome Kutschers first novel and series launch, a fast-paced blend of murder and corruption sent in 1929 Berlin.Publishers Weekly (starred review)